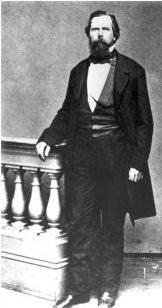 John Bidwell was the younger of two men who led the Bidwell-Bartleson party to California in 1841.  (The other was John Bartleson.)  Having pushed hard to reach what became northeastern Nevada, the party abandoned their wagons near Big Springs, NV and pushed on to California using pack animals.  Their group was the first to attempt overland travel to California by wagon.